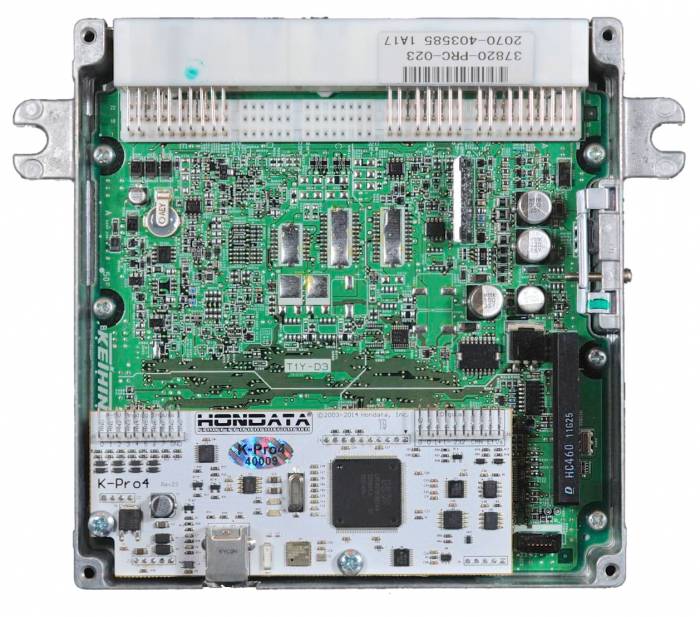 The KPro4 consists of a hardware modification to certain K-Series ECUs, plus Windows software which allows you to re-program the ECU and datalog sensors.

The K-Series Programmable ECU (K-Pro) consists of a hardware modification to any K-Series ECU, plus Windows software which allows you to re-program the ECU and datalog sensors.

The KPro4 is the 4th generation board made by Hondata, superseding all previous versions, with a more powerful processor, enhanced on board datalogging, faster upload and datalogging, live tuning and autotune, Bluetooth, ethanol sensor input, dash outputs, advanced protection and closed loop wideband support.

Click on your specific application for details and pricing. Hondata does not sell directly to customers. To order, fill out this form and contact a Hondata dealer.

The KPro4 uses a faster processor with more capability than the KPro-III. This allows the KPro4 to perform more tasks without slowing down the ECU, like live tuning, output to a dash, flex fuel and advanced protection. Calibration uploads and datalogging from a laptop are also faster.

Enhanced on board datalogging

The KPro4 has double the datalogging memory (64 MBit) of the KPro-III and can datalog at double the rate (100 Hz), giving an on board recording time of 10 - 220 minutes.

Main tables can be updated in real time, without affecting the operation of the engine. This allows dyno tuning without pausing to upload.
Autotune uses live tuning and a laptop to tune fuel tables as you drive.

The KPro4 includes Bluetooth for datalogging and tuning wirelessly with a laptop without a USB cable, and mobile datalogging on an Android or IOS device.

An ethanol sensor can be directly connected to the KPro4, allowing flex fuel operation, with adjustments to fuel & ignition tables performed automatically based on fuel ethanol content.

A speed sensor input can be directly connected to the KPro4 and sent to the ECU. This is configurable to any pulse based sensor and eliminates the need for a stock speed sensor.

The KPro4 has serial output (both TTL & RS232) and CAN output so that a dash can be driven from the KPro. The AiM MXL, Racepak & generic CAN outputs are supported.

Advanced protection options use the KPro4 analog inputs and engine information to intelligently shut down the engine when the conditions might be dangerous to the engine.

The KPro4 can process a wideband lambda input (either analog or digital) and allow the ECU to run in closed loop from an aftermarket wideband without requiring the stock o2 sensor.

All Hondata software is available for free download at hondata.com